The art exhibition"Iežamet – What is ours" shows art by the Sámi artist group Mázejoavku. Exhibition periode 22.11.20 - 29.01.21, at Kautokeino Museum. 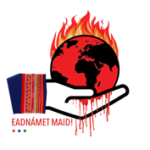 Today, the works from this time period stand as manifestations of Sámi claims of sovereignity; some fragile and subtle, others standing tall with eyes staring right back at the outside world. The works in Iežamet –What is ours shows glimpses of the artist’s intentions, ideals and roots, but also their art education. The group partook a great deal in the Áltá actions and other demonstrations, fighting for Sámi self governance, and many of their artworks was incorporated in the Sámi rights movement.

The exhibition Iežamet is a collaboration between the Sámi artist collective Dáiddadállu in Guovdageaidnu and RiddoDuottar Museat, as a part of the digital art seminar Eadnámet Maid that took place earlier in November. The seminar puts focus on violence against nature.

EadnámetMaid’ is a collaboration between Dáiddadállu, Office for Contemporary Art Norway (OCA) and the Sámi Parliament in Norway, and is a continuation OCA’s and the Sámi Parliament’s long-term engagement with the town of Máze, iconic in recent Sámi political history, and its advocacy for the establishment of an international Indigenous artist residency there.

The exhibition is curated by the Sámi artist and author Susanne Hætta, assisted by Sámi duojár and designer Ann-Sofie Kallok. Both are artist partners in Dáiddadállu.

This declaration applies to RiddoDuottarMuseat with associated websites.

What is a cookie and local storage of data?

When you visit our website different types of data is stored locally on your unit via your browser. This data could e.g. include user settings, information about how you surfed our website, which browser you used, and which ads that were shown.This type of “locally stored data” could be used to customize content and functions of services for you, thereby contributing to a better and more meaningful visit.Cookies do not contain directly identifiable data about you (such as name, address, telephone number etc.), instead the information regards your browser and the activity through it.

What do we use cookies and locally stored data for?

We use locally stored data to:

Both RiddoDuottarMuseat and our subcontractors (e.g. Idium AS as supplier of this website) stores data locally on your unit. Eventual subcontractors are subject to the data processing agreement and can not use data for anything other than delivering the service we have ordered from them. For more information on how Idium AS treat personal data see here.